The first point of this website is an article about this course.
Posted by Lucia Prieto Godino at 09:49 2 comments:

The course has finished successfully!

Today was the last day of the course. We all had a great experience, and the students have learned a lot of things that now they will be carrying with them to their host institutions. Many of them were talking about starting to work with Drosophila, and all of them agreed that the course changed their way of thinking about doing science in Africa, which I think it is one of the greatest achievements that we could do. We have run a questionnaire among the students, and we are planning in publishing a paper where to explain in detail how to set-up a course of this kind in East Africa, and where we will show the conclusions from the student's questionaires, and a follow up on the students' research before and after the course . More updates will follow here. Please if anyone would like to have more information on the course drop me an email to llp23@cam.ac.uk.
Posted by Lucia Prieto Godino at 10:31 2 comments:

The Neurolab. in Ishaka

We are now at the last week of the course. During this week the students have learned about how to use Drosophila as a model for studying complex behaviours such as courtship and aggression, as well as a model for human diseases. Now they are busy working in their final projects. They have paired in groups to perform the following short projects, which will help them to apply in one project everything that they have learned during the course:
Group 1 (Jimmy and Yunusa): Will solve the controversy in the literature about the role of sensory input in crawling by testing the two sensory lines used in the literature PO163-Gal4 and 504-Gal4
Group 2 (Bolaji): Will test the role of chordotonal neurons in larval crawling and compare it to the role of pickpoket neurons.
Group 3 (Maureen, and Lucille): Will perform memory experiments in control and dunce mutants. They will perform two paradigms: larval olfactory associative memory assay, and proboscis extension habituation and sensitization assay.
Group 4 (Nelson, Joseph, Sylviane): Will perform courtship and aggression experiments and they will test control flies and flies expressing the beta amyloid human protein that causes Alzheimer diseases.
Group 5(Goji, Abba, Ezekiel, Paulin): Will perform behavioural olfactory assays in adult and larvae of lab and wild Drosophila.
Group 6(Steve): Will try to perform antennograms and single sensillum recordings from Drosophila and Musca antennae.
Group 7 (Alfred, Sam, Ngattu): Will perform electroretinogram recordings in various species of insects, including Drosophila to compare the temporal resolution of their visual system.
They have to carry out the required literature research, built the experimental set-up, perform the experiments, analyze the data, and drawn conclusions. They will give a 15 minute PowerPoint presentation on Saturday in which they will introduce the problem and present their results and conclusions.
Here you can see some of the pictures from students engaged in doing their projects.

Some of the things we have done during these two weeks

We have now finished the first two weeks of the course. Over these two weeks the students have learned about Drosophila as a model organism and how to set-up a Drosophila lab. They have learn about the genetics of Drosophila, which took quite some time, but now I am sure it is almost like their mother tongue. They have also learned basics concepts in neuroscience, such as the nature of neural impulse, and basic concepts on how neurons work to produce adaptive behaviors. During the practicals among other things they have learned  how to do muscle recordings of neuronal activity with inexpensive amplifiers. They have recorded from the legs and wing muscles of grasshoppers (see picture 1)! and observed under the microscope a multitude of different insects, which all together helped them to appreciate in the practice the nature of the neural impulse and the diversity of sensory and motor systems used by insects.
The students also now know how to collect virgins for their fly crosses, and how to dissect brains out of Drosophila larvae, and look at them under the fluorescent microscope.  We have managed to install a webcam on the fluorescent microscope, so that the students can take pictures of the fluorescent preparations that they look under the microscope. The images resulting from this system are actually much better than we expected (see picture 2).
The students have learned about mechanosensory, chemosensory, visual and motor systems during the theoretical lectures, and they have looked at the wild type behaviours of flies and other big insects during the practical sessions (see picture 3).
They have also performed inexpensive cutting-edge neurogenetic experiments on genetically modified larvae. It is being intense but the effort is worthwhile, now they are ready for the lab work of the last week, during which they will need to apply everything they have learned!
Posted by Lucia Prieto Godino at 01:25 1 comment:

The students and their projects

The second week is over and we have had a chance to hear the students presentations of their current projects. At the end we asked each of them to do a little drawing representing their project on the board of the lab. The final result can be seen in the picture. 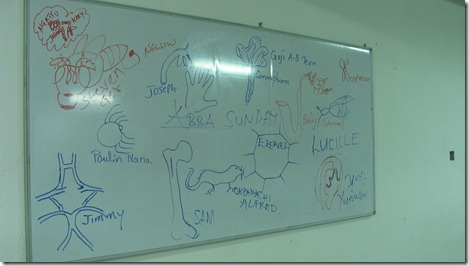 Abba has studied the correlation between the relative length of the index and ring finger, which is determined by age 2 and correlates with the prenatal exposure to androgens, and other traits that are determined later on as the diameter of the wrist and hip circumferences. His passion is the study of memory retrieval.

Paulin is studying in Cameroon the potential of a plant (I’ll keep the name so no-one can steal his idea) in the war against those ticks that martyrize the cattle (and anyone who shares the path with them, I am the proof of that).

Lucille works evaluating the action of insecticides in Tanzania, doing lab and field studies to analyze their efficacy and safety.

Ngattu studies malaria, tuberculosis and meningitis from an epidemiologic point of view and searches for a better and quicker diagnose to reduce the risk of contagion.

Sam has studied the torsion angle of the humerus (the representation of the anatomy department of the Kampala International University –KIU- , co-organizer of the course, is noticeable). Using this course as a start-up, a Masters in Anatomy and Neurobiology is going to begin at KIU, and Sam wants to continue his research comparing the number of synapsis in lab animals vs animals from the wild. Will wild animals have more synapsis? and, if they do, will they be smarter?

Steven is characterizing the proteins involved in odor perception in tse-tse fly and is very interested in the possibility of using Drosophila as a model system.

Jimmy, another anatomist, has studied the epidemiology of atherosclerosis (the deposit of fat plaques in the arteries).

Yunusa, the youngster of the course, is still thinking what to do for his Master’s project. He has a great passion for public health and wants to do a PhD in a good institution studying mental dementia in HIV patients.

Iliya Ezekiel is interested in the study of epilepsy and sleep. Before the course, he was thinking in an experimental setting to study spatial learning in rats. Now he is considering a change of system.

Sylviane, also from Cameroon, is analyzing the effect of traditional remedies to treat epilepsy.

Maureen, who has come all the way from Kenya with her little baby, studies the epidemiology of diverse diseases and the distribution of the different mosquito species that transmit them.

Goji has studied the effect of an African plant extract in the level of glucose in the blood using rats to which they have induced hyperglycemia.

Bolaji Samuel wants to study the effects of the combined use of alcohol and cannabis and he is also studying the possibility of using Drosophila as a model.

Joseph’s research focuses on the analysis of the effect of some traditional plant extracts used to treat erectile dysfunction.

(Students, please, forgive me if I misplaced something or if trying to summarize I simplified your work so much that the description is almost wrong)

We are going to the Falling Walls conference!

Lucia Prieto Godino
I am a postdoctoral researcher at the University of Cambridge.I have set up this blog as a platform for the course that I am organizing and teaching in Uganda from the 10th to the 29th of October 2011. For information on the course, and activities, please check the posts on the blog

There are a lot of people and organizations that have and are helping in a way or another to make this project possible. Here I would just like to list them in no particular order:

-Dr. Adelaine Leung and Dr. Jill Pen. For advise on the complex behaviour module, and equipment from Harvard Univerisity

-The Slater Fund at the University of Cambridge. For travel grant

-Dr. Jean-Paul Vincent, and Matt Williams at the MRC National Institute for Medical Research, for donations of equipment.

- The Kampala International University. For hosting the course, providing accommodation and essential equipment

-Dr. Sadiq Yusuf, who is co-organizer of this course, and his colleages at KIU for helping in all the organization ( Dr.Peter Ekanem, Dr. Kintu Mugaga, and Mr. Francis Ndagire)

- UCSD researchers Liz, Andy, Sarah and other members of the Subramani lab, Julia and the members of Tracy Johnson's lab and Suzanne and MJosé, for the money and lab supplies that they donated for the cours